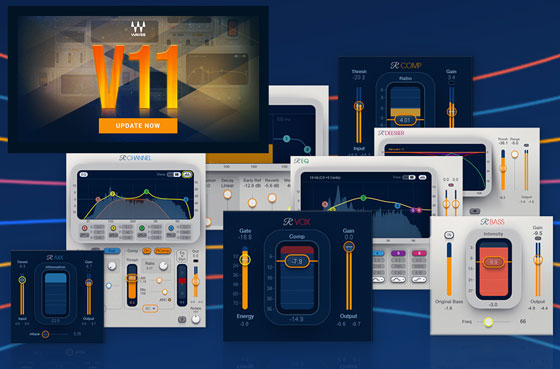 It was somewhere over the horizon… now it’s here! Waves Audio has announced the availability of V11, the new version of Waves plug-ins. They say that by updating to V11, users “benefit from future-proofing” their sessions, ensuring continued compatibility with the latest DAWs and operating systems (including macOS 10.15 Catalina). As part of the V11 package, Waves have also announced a new improved version of Waves Central, the application that installs and manages your Waves licenses across different devices, “streamlining” Waves Central for a more intuitive (aka less baffling) license management experience. Waves recommend that if the computer you are using is used by multiple users (for example in a commercial studio or school system), you run Waves Central’s Version Organizer after moving licenses, to make sure your license version/s and the installed software version/s are aligned.

Resolution reminds audio pros that Waves does not “force” users to update to V11 or purchase WUP plans to continue to use already-purchased plug-ins. V9, V10 and V11 plug-ins can all run on the same system, as long as you don’t install two or more versions of the same plug-in. Each plug-in should be installed as either V9 or V10 or V11, but not more than one version.

No comments yet! You be the first to comment.